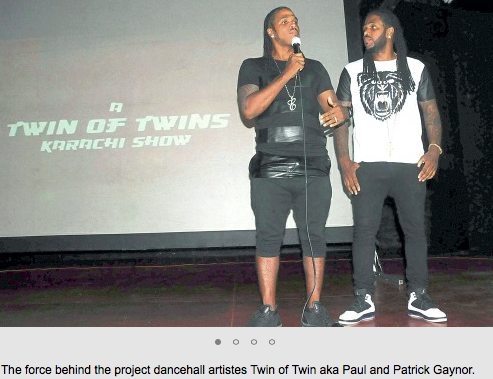 “This project is a long time coming. It took a lot of negotiations to get it where it is so I’m finally happy to have it released to the public,” Hart told the Jamaica Observer.

Ching Pow: Far East Yardies takes three kung-fu movies, Ninja Death and its two sequels, re-edits and redubs them into a single picture for maximum laughs. Providing the lead voices are local comedy team Patrick and Paul Gaynor, better known as Twin of Twins. Hart said he was inspired by a badly done YouTube video and felt the concept could work better if given a more professional touch. The nonsensical plot follows First Born, a whorehouse bouncer, who must take his rightful place as ruler of his land. Many of the supporting characters should be familiar to any Twin of Twins fan, and the story plays on many of Jamaica’s common social stereotypes.

“It was very music-driven at first, but then I found out the cost to license the tracks we wanted to use and we had to rescore the whole thing,” Hart explained.

The big issue came with the rights to use the Ninja Death footage. As these Far Eastern karate movies are simply film fodder it took a while to find the original producer, which Hart did with a fitting comedic twist.

“It took us two years to find him using a private investigator. Turns out he wasn’t in Taiwan or East Asia at all, but New York,” Hart said laughing.

The movie will now play at the Theatre Place from August 7 to September 7, with 8:00 pm showings Tuesday through Sunday. At the month the month, Hart plans to take it around Jamaica and across the United States targeting the diaspora.