Mike at the Movies

Ching Pow is a dancehall movie.

I find it important to start with that bit of overstatement,as there are some, well-intentioned and otherwise, who easily fall for the bait of writing it off based on the profanity and seeming crassness as well as the soft-core sex and other elements that contribute tot he producers’ self-styled “NP” (No Pickney) rating. 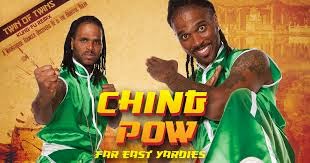 Those seeing the movie, which ended what is presumably a preliminary run Sunday night last at the “off-Palace” location of New Kingston’s Theatre Place, will actually find a cunning mash-up of classic R-rated martial arts and contemporary dancehall expression, with thinly veiled (and sometimes not) social commentary that has a lot in common with the vintage National Gas magazine of the 1970s, just peppered with expletives – without which, I hasten to add, Ching Pow would STILL be funny.It is, in other words, a roundhouse kick to the gut of the falsely conservative.

Of vital importance to the full appreciation of what producer-director Bruce Hart and provocateurs Twin of Twins have wrought with Ching Pow, are the prologue and epilogue that bookend the main story.

And that main story centres around the kung fu staple of royal succession -this time with a Japanese as well as Chinese twist. The king is dead, the queen is presumed dead (though actually in exile), and their first-born son,(the character is actually given that name in the film, First Born) is working as a tout and pimp outsidea whorehouse, er that should be house of heavenly delights. 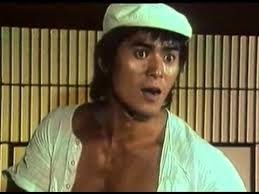 There is an honourable sensei, Master Bob (the Marley reference is, of course, obvious), villain, Bad Muta (also obvious) an inscrutable blind prophet-teacher ad, naturally, a love interest, as well as the assorted expendables who provide fodder for the jokes and contribute to the body count.

Family, betrayal, megalomania and love – yes love in all its varied stripes are part and parcel of the narrative, but it is in the imposition of contemporary Jamaican dialogue, that Ching Pow really succeeds. Sound and visuals are so expertly melded, and the Twins – who provide the bulk (if not all) the voicings are so on-point with their expressions, that the film’s conceit of disillusioned yardies transplanted to the Orient becomes not merely plausible, but readily acceptable. People all over this planet are ultimately motivated by and react to, the same things, regardless of the varied brushstrokes of culture and language: the guy wants to get the girl (and vice versa), the bad guy wants to run the world, and good somehow always conquers evil – even if “good” starts out as a egotistical, whoremongering “gyallis”.

None of the above is even necessary to having a good time with this movie, provided your sensibilities are sufficiently fortified. Ching Pow is just the kind of subversion that the country at large ought to be exposed to right now. It may not come to a cinema (God knows there are too few of those left anyhow) but here’s hoping it comes near you….soon