Mix kung fu with a couple of Jamaican comedians and some reggae, and what do you get? A must-see movie mashup about an evil-fighting brothel bounce
Ching Pow: Far East Yardies 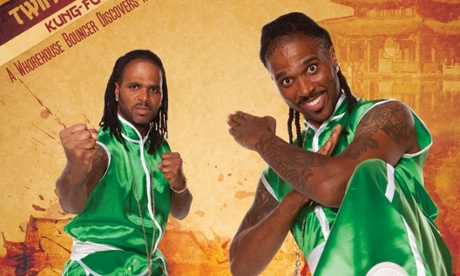 Red carpet, dancehall reggae stars, folks dressed to the nines, ample Red Stripe and Guinness for everyone. This is a screening of a film calledChing Pow: Far East Yardies in Kingston, Jamaica. But this is not just any movie – it’s a mashup of standup comedy, karaoke, remix culture and an odd, three-part Taiwanese kung fu movie from the 80s. Jamaica’s music industry is built on versioning and revisiting instrumental musical riddims, and this is the logical cinematic extension.

For the past month, Ching Pow has been a must-see – again and again. A tale of a brothel bouncer destined to fight evil is given a Jamrock twist. Bob Marley shows up as a martial arts guru who provides essential instruction to the bouncer, a bumbling but ultimately successful hero. Martial arts movies have had an audience in Jamaica for decades, so it’s not surprising that screenings have been packed.

The popularity of the film’s first run has led to demand across the island. It’s being shown in a venue known for dramatic productions, so Ching Pow is linked to the same expectations Jamaicans have for theatre. It’s common for plays in Jamaica to tour, and then make a jump to the diaspora with shows in New York and London. A second run in Jamaica is a sure thing, and it would seem that the movie would be an obvious choice to appeal to an international audience.
Source material for Ching Pow is a 1987 low-budget trilogy called Ninja Death. Comedy duo Twin of Twins (brothers Patrick and Paul Gaynor) provide the voices for all the main characters. The Twins are known for their off-colour humour and send-ups of Jamaican politicans and celebrities. They are also comfortable mocking themselves as well as Jamaican cultural mores, and this film is no exception. Director Bruce Hart thought the twins were perfect for the film: “They have a dancehall attitude. [The Twins] put a spin on it. There is a purity of their raw speech. Underpinning it all, they are really reflecting on our culture. They have taken characters and the attitude, but they also comment back on it. There is a satiric side about them.”

The film came about after Hart was inspired by the US TV series Kung Faux, which reworked and redubbed bits and pieces of kung fu cinema with voiceovers and video-game-style effects. Hart upped the ante with a full-length feature film. The original was bizarre and disjointed, but, as Hart says, it had more than enough material to “manipulate and reconfigure the story”. And the hilarity is enhanced by near-perfect dubbing, achieved through experimentation on behalf of the actors. There’s also the requisite reggae – dub matches particularly well with the punching and kicking.

Getting permission to play with the source material was a challenge. The creator (or creators) of Ninja Death weren’t easily accessible. Nearly superhuman efforts – including the hiring of a private investigator – were made to contact the copyright holders. The search led to Hart’s film becoming a case study for Harvard law students interested in the rules and regulations surrounding orphan works.

For Hart, Ching Pow demonstrates new possibilities. The excitement and enthusiasm surrounding the film demonstrates that there is an audience for this type of project: a movie that otherwise might be forgotten is recut, rethought and remixed for a specific audience. “This could be done in different languages for different cultures,” he says. “There is a lot of potential.”